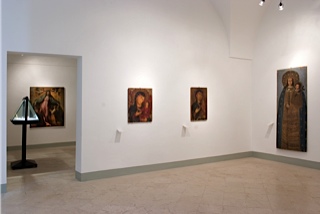 From the hallway we enter in a charming room, dominated by the Icon of Madonna, improperly called of the Sapphire, from the church of S. Maria, and subsequently placed in the Cathedral. This Icon, according to reliable sources, should be a copy of the one of S. Maria in Portico in Rome and in the main setting also presents relationships with the Icons from Rutigliano. However,omitting hypothesis, this painting of the 15th century , follows the patterns of the figure of the Madonna della Madia of Monopoli .A work in which the refined gold background, the lines and formal purity are combined with the mystical values. Another significant icon of the Madonna delle Grazie of 1300, from the Church of S. Pietro. We should note the small figure at the bottom in the left praying ,that is the donor. The painting differs from the usual iconographic scheme of the “Hodighitria” that present insignificant changes. Other images are exposed like two valid copies of Madonna with the Child of votive significance of the 1800, one from S.Salvatore’s, the other from S. Pietro’s. Particular value  has the icon of“Nostra Signora di Loreto con il Bambino” of the seventeenth-century, in which the verticality of the seraphic figures does not negate the devotional sense of the work. Ignazio Di Montella is the artist of the canvas, from S. Pietro’s, made in the late eighteenth century,the“Madonna con il Bambino Benedicente , characterized by bright colors and neatness.