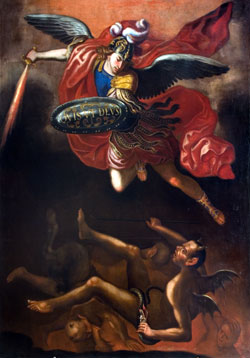 In the works, collected in this museum, are reflected political and cultural successions from the Byzantine to the 19th century.

These testimonies full of suggestions, came from local churches and are grouped in this beautiful and bright halls of the Episcopal Seminary, wanted by the Bishop Giuseppe Cavalieri, in 1668.

Here are exposed paintings that belong to three school of art,paintings inspired by Byzantine, Venetian and Neapolitan.

In the leading corridor to the museum are presented the portraits of the Jesuits: S. Ignazio di Loyola and Francesco Saviero, of the second half of 1600 placed at the begin in the Church of the Jesuits in Piazza Garibaldi and then, in the Church of St. Teresa. We face with images in which the characters are obviously physiognomic, supported by pictorial and plastic values.

Follows in the same space, a painting of “San Michele Arcangelo ” by the local school,of the first half of the 1800 , opera with an high chromatic lively, from the church of S. Martino.Here are also placed on the same wall: a mannered copy of the “Annunziata”of  De Mura always coming from the Church of Jesuits, of the second half of the 1700. We find also a “S. Luigi in Gloria “, the late 1700, and the portrait of Bishop Raimondo Fusco brings us to portraiture of the early 1800 ,  for its strong chiaroscuro.