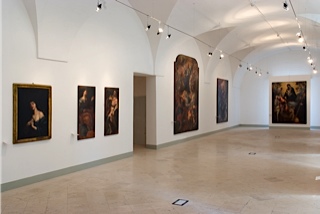 From the “Hall of Venetians”, visitors enter in the  one dedicated to Neapolitan painting , which imposes, as an “ex voto”, the beautiful canvas by Finoglio painted around 1634, during the period of infestation oflocusts that plagued Monopoly.

The composition is divided along two diagonals, on these are setted the figures of the Virgin, S. Eligio and S. Trifone the patron of peasants. The sumptuous color, the cascade of white, red and blue put in evidence to strong influence of Caravaggio’s coloring. The painting of “St. Vito” attributed to Alessandro Fracanzano, presents a respectful and essential figure placed in an atmosphere of warm shades.

Under Venetian influences of 16th and with grafts of late Flanders’s Mannerism for its descriptive meaning, although it is exposed among the Neapolitan works, the painting “Il matrimonio mistico di S. Caterina e S. Apollonia” wrapped in a soft golden light that includes figure and landscape.

The hardy composition of the Church of S. Martino, who represents the Saint, the Virgin Mary, the poor S. Benedetto, contains precious  Venetian colors and elements of local culture and Naples’s culture.

The sensual bust of Maddalena, a copy of the painting by Andrea Vaccaro indicates us mannerist and descriptive elements.

Andrea Miglionico is the painter of  the great canvas of the “Transfiguration”.

The three paintings are from the Church of St. Salvatore  in Monopoli.

Belong to Giambattista Lama the two paintings already in the Church of St.Salvatore, of 1775, the “Trinità” with S. Gennaro, S. Carlo Borromeo St. Biagio S. Francis de Sales, a clear Mannerist work of the figures and in the colors and the other painting of S. Eudocia hermit, tempted by the luxury and rescued by S. Michael slaying the demon. To the painting is imposed admiration for chromatic surfaces that appear silky.

With the “Madonna del Rosario” between S. Catherine and S. Domenico del 17thcentury, of the Church of St. Martino by an unknown artist ,and with the framework entitled “La Sacra Famiglia” with St. Anna, S. Gioacchino full of traces Solimena and modest matter, we decide to  conclude the journey among the paintings of this museum. 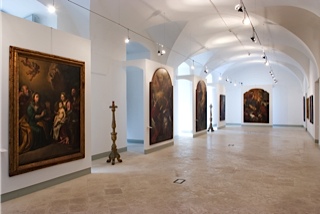 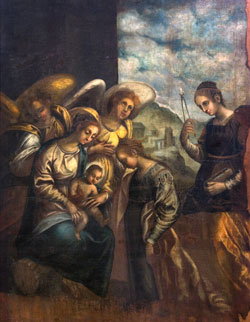