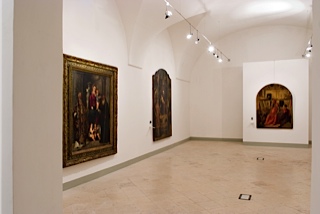 In this room, you access by going into the hallway.Here is exposed the  Table which shows the majestic figure of “S. Girolamo” in a  14th century metaphysical space, made by skillful perspective.

This painting moved from the Cathedral to Bishop’s scope then.  was attributed to Lazzaro Bastiani, who worked a lot between 1449 and  1512, one of the most noteworthy artists of the generation of  Vivarini, Mantegna and Bellini, and represent several contradictory elements.

The love for details and clarity of the forms do not exclude  Flemish-Neapolitan influences (see S.Girolamo in the  Museum of Capodimonte in Naples, painted by Colantonio) and the formal constructivism of Mantegna.

Beside this painting, is placed one of the “forlivese” Costantino  transferred to Monopoli.

The painting shows the Madonna on the Throne  between S. Lorenzo and S.  Antonio Abate, which denote a typical  Venetian setting. Ferrara presents colors dull and heavy that do not detract, however, monumentality and expressiveness to the figures.

It can be seen alongside the work of Costantino from Monopoli, a painting by Francesco Vecellio representing the Virgin enthroned with the  Blessed Child between S.Nicola of Bari and S.Benedetto ,originally this painting was in the church of S. Leonardo.

A work of the 1500 ,that offers a  chromatic tone and freshness of the execution,fully satisfying the classical criteria.

Surely no less expressive is the painting of the Madonna in Gloria between St.  Pietro ,S.Paolo , S.Francesco of Assisi And St.Caterina of Alexandria . The painter Paolo Veronese with his masterful touches that illuminate out the”Body Forms” leaked “from heavy restoration”, done in the eighteenth century by the painter Vincenzo Fato from Castellana.

Attributed to Jacopo Palma il Giovane , exponent of Venetian Mannerism,  the painting of the “Incoronazione della Vergine”, coming by the Episcopate  of Monopoli, has a suffused atmosphere, made in soft strokes of color which dissolve.

From S. Domenico’s, , perhaps, the most beautiful painting of Palma in Puglia, depicting S. Cecilia, The Virgin and Santa Caterina, which is closely linked to the paintings and tonality of the volumes of Tiziano.

In the closing of this “Venetian Hall”, is put on view  the shadowy “Pietà”, maybe done by Alessandro Fracanzano, or Palma Il Giovane, whose theme leads us to the Pietà by Michelangelo.

The painting shows strong contrasts of light and shadow, which defines the drama of the subject.