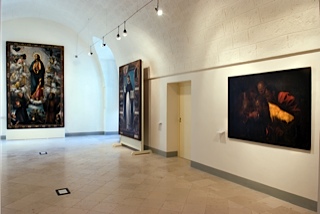 The painting of the Immacolata Concezione, from the church of S.  Francesco Monopoli and exposed in the new space (from the chapel of the  Seminar) of the Diocesan Museum, is datated 1588.

The artist, according to Graziano Bellifemine, “is to be found among painters  active in San Francisco between 1570 and 1590. ” The large canvas (3.45 x 2.12 meters) has many stylistic differences.

The composition has in the center the figure of the Immaculate Conception, in her static stiffness,which  contrasts with the movement of the angels, whose  movements sends us back to primitive forms.  In the foreground, down to the foot of the Immaculate, the two saints  Francesco and Antonio on thier knees and  the portraits of the purchaser in  their expression, seem entranced by the intense light of the space composition, determined by the white-transparent of the sky and clouds, which are embed in flowers and figures , “legavit” where we can read the Litany of the Saints.

Even if the work,is not united it reveals a certain color finesse.

Very interesting is the painting of St. Vincenzo Ferreri, from the church of San Domenico in Monopoli.

The harmonious composition with the central figure of the saint, ends  with the side panels, which describes his life.

The composition is calm, candid and results in a well-balanced relationship between space and light.

The white robe of the Dominican saint is strengthened by the black cloak that  put the figure in a strongly contrast.

The painting reaches a unitary dimension by the clear color and by the transparent fund that includes each element of composition and is soaked in a bright light.

The painting, in the bottom on the left, reports the date 1605.

Found by the Carabinieri, returned to the Diocesan Museum, the painting  representing “L’incredulità di S.Tommaso,” is proudly displayed in the new exhibition space of the museum in Monopoli.

This painting is a  perfect copy of Caravaggio’s famous composition, exhibited in the Museum of Sanssouci in Potsdam.

The canvas  differs from that of  Caravaggio, for  some chromatic diversity and reveals, for the strong chiaroscuro accents, (which is typical of the style of Caravaggio, of 17th century), a strong dramatic performance.

It is hard to know who has made this “composition”, for the lack of documents that assert its paternity, however, is possible to assign it to the painters of Caravaggio’s school operating a lot in Monopoli. The fourth painting of the Madonna del Rosario with the Saints Francesco, Domenico and Caterina, suffered, unfortunately, the ravages of time before being exposed in the new hall of the Diocesan Museum.

We know very little of this painting. Revealed in the formal representation, a

manneristic character and it is possible that the painting could be made towards the end of the 17th century. 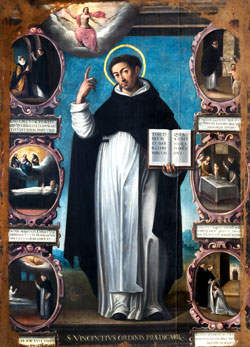