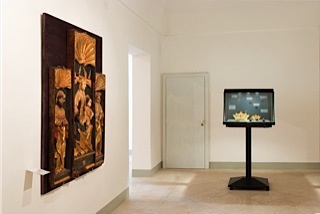 In the same space ,there are also Miniatures of the book of Confraternita del Corpo di Cristo painted by Reginaldo de Pirano in 16th century ,manuscripts, liturgical objects and the famous reliquary in gilded silver with cloisonné enamels.The triptych depicts by precious chrome, Christ Crucified between the Virgin and St. Giovanni l’Evangelista in the main box, and in the side doors, S. Pietro and S. Paolo.

The purity of the enamels and gemstones make this work, dated between the late 10th and early 11th century, an example of rigorous simplicity and color filter. Are collected, in addition to this, chalice  , Chrism Oil vessels, a beautiful Monstrance of the 18th century and the liturgical vestments of the 18th century.

Visitors can also admire the golden crowns of the effigies of the Madonna della Madia and Child offered by the Capitolo of the Basilica of St. Pietro in the Vatican.

In the room of silver and gold is placed the Campsa wooden triptych made in 1502, in which the close relationship between the figures and architecture, shows a clear connection with the classical works.

The Nordic taste of the manifacture, the quality of gold, the tint of dark-green background and red drapery, make it one of the most expressive bas-relifs found in Puglia, with its mystical silence which is fitted.

“Last but not least”, on the opposite wall of the room we admire the beautiful painting of the “Madonna della Misericordia” from the Church of S. Antonio, the painter Palma il Giovane. The forms of monumental painting, revealed an essential volumetric value. 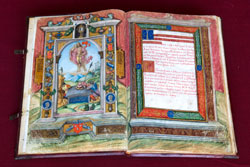