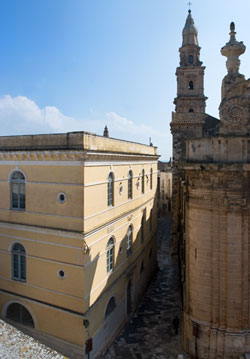 Museo Diocesano of Monopoli was established in June 29, 2002, in the anciet Episcopal Seminary, founded by Bishop Giuseppe Cavalieri in 1668. We believe that there are no museums, more than diocesan ones, that can espress the history of the territory in which they take place and better able to describe it.

The diocese is a homogeneous area in terms of religious organization, and usually also from the point of view of the culture. In the case of Monopoli, since the 11th has become an important diocese, which expands itself gradually over the centuries, this is particularly evident and is enhanced by meanings because of the complexity and specificity of the history of the city. The art reflects political and cultural successive rotations through the ages, from the past “Byzantine”, as witnessed by the icon of the “Madonna della Madia”, according to legend came from the sea on a raft of beams, the Swabian and Angevin period, the Napoli Aragonese relations, the strong bond, even administrative, that tied it at least for two centuries to Venice, to the cultural debt against the Viceroy and later the Kingdom of Naples. All of this is told with inevitable gaps and fragments, in  the works exposed in the new “Museo Diocesano”, situated in the  beautiful, bright rooms, recently restored of the Episcopal Seminary, ( a “training institution” for the clergy) wanted by Bishop Giuseppe Cavalieri (1664-1696), the construction begun in 1666 – as attests  the plaque on the ground in the main room, which in future will host temporary exhibitions – with the benefit of the financial support of Gianlorenzo Morandi, a lawyer originally from Monopoli who worked in the Consistory in Rome and other generous benefactors. Gianlorenzo Morandi also gave financial support to eight students from Monopoli and to one from Cisternino (then part of the diocese Monopoli), to the Rector, Vice Rector and two prefects, as is reported in 1773 Abbot Nardelli Alessandro “Monopoli Manifesta”,who attended the Seminary.

The works exposed came from different churches of the Diocese of Monopoli, and invite the guests to a great journey to the rediscovery of Christian culture over the centuries, so magically appear  paintings by Lazzaro Bastiani Costantino from Monopoli, Francesco Vecellio, Paolo Veronese, Jacopo Palma il Giovane, Paolo Finoglio, Alessandro Fracanzano, Andrea Miglionico, Giambattista Lama, works that include a period that goes from 1400 to 1700, pledged to Venice and to the Kingdom of Naples, because of the historical evolution of the city of Monopoli. We can admire in the gallery space, a precious reliquary (1000 -1100), Icons, Byzantine artistic heritage from the past, a Campsa wooden triptych (1500), detailed decoration of Reginaldo de’ Pirano a Portulano, manuscripts, antiphonaries, liturgical objects of great value, vestments, chalices, Chrism Oil vessels  and monstrances.